Standard density functional theory calculations are 0 K ground state calculations, but most materials are used and modeled at room temperature and above. The Debye model and phonon calculations are two commonly used methods to obtain Gibbs free energies (

This tutorial will guide you through calculating the Gibbs free energy of diamond Si with atomate. The resulting Gibbs free energies from the calculation will be queried from your Materials database and the heat capacity calculated with NumPy and compared to experimental data.

Gibbs free energies are calculated in DFT based on the following relation:

is the vibrational contribution to the Helmholz energy. This vibrational energy is calculated using a harmonic approximation, here via the Debye model.

To calculate the Gibbs free energy, total energies are calculated for several volumes, then vibrational contributions are added for each volume over a range of temperatures to give

. Then an equation of state is fit for each set of energies and volumes at each temperature. Several different equations of state are implemented in pymatgen and several of those are discussed in terms of the Debye model by Shang et al. (Comput. Mater. Sci. 47, 1040–1048 (2010).). Using the fit equation of state, the volume that minimized the energy at a fixed pressure (usually, but not always

) is found. Finding the minimum volume at each temperature and fixed pressure yields the conversion from

From the perspective of a workflow, the Gibbs free energy workflow is procedurally similar to the elastic tensor workflow. First the input structure is optimized, then volume of the optimize structure is deformed and energies calculated to yield the points for an E-V curve (or phonon calculations), finally the analysis workflow corresponding to the Debye model or phonon formalism is performed. 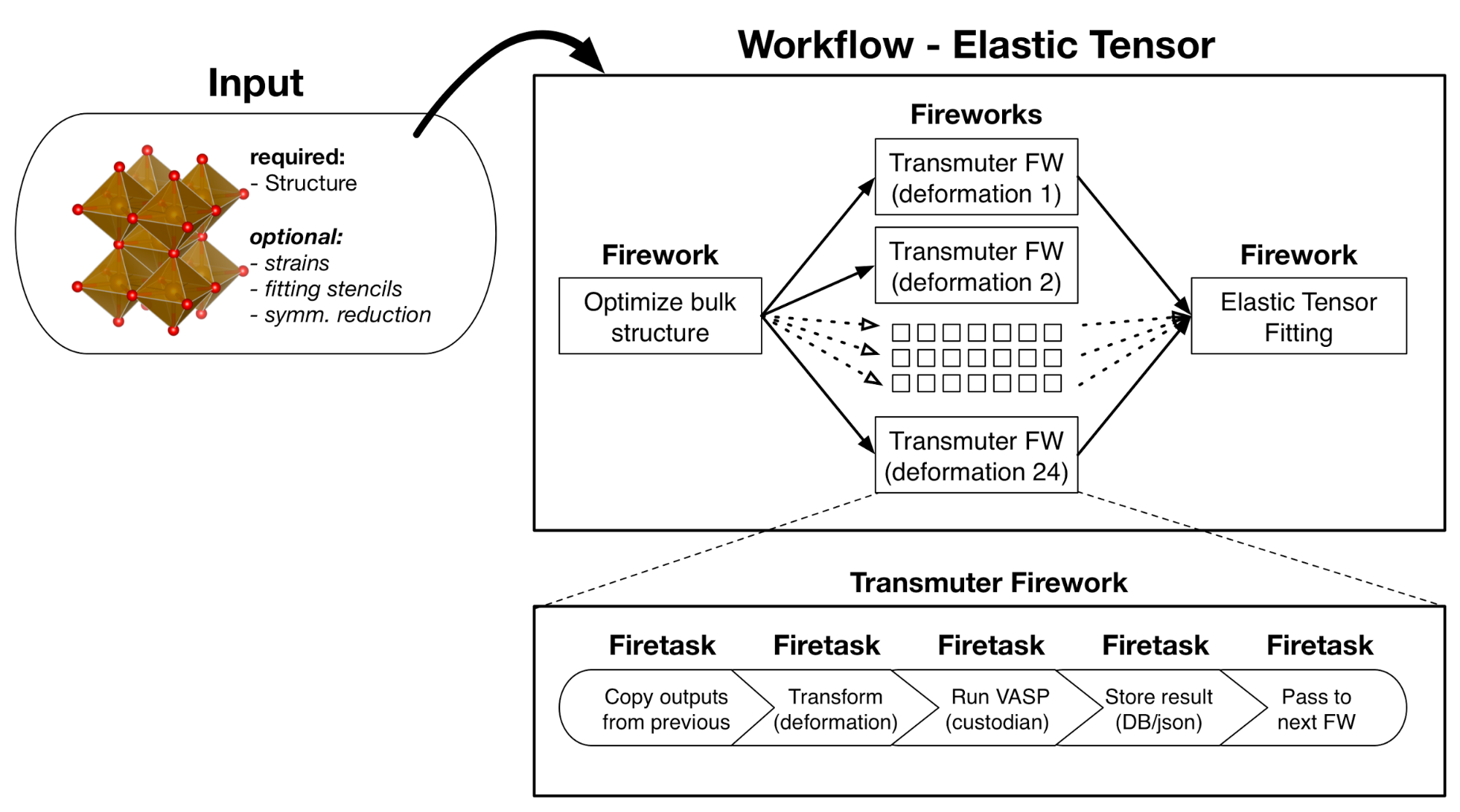 If you do not already have important prior results in your atomate environment, start fresh by running:

This will reset all of your previous Fireworks and Workflows in your LaunchPad. Do not do this if you have actual results that you want to keep!

If you do not or want to reset your LaunchPad, you can set up a different database to use for tutorials or simply accept mixing your previous results and workflows with the contents of this tutorial in your database.

Use Python to generate and add the workflow¶

We’ll use diamond Si as a simple example and get the structure from the Materials Project. This requires that you set up an API key in your .pmgrc.yaml. In the installation tutorial, you set up your FW_config.yaml, you indicated the atomate Fireworks can be found at atomate.vasp.fireworks. Similarly, atomate preset workflows can be imported from atomate.vasp.workflows.presets.core, which thinly wraps the base workflows (atomate.vasp.workflows.base) allowing for common settings to be changed with configuration dictionaries. And we can setup the workflow and add it to our LaunchPad ready to run in just a few lines of Python.

In the directory you created, make a Python script named gibbs.py with the following contents:

Note that here we used a Poisson ratio of 0.2, found at the Materials Project entry for Si. In the Debye model, the Poisson ratio controls the shape and magnitude of the elbow in the heat capacity curve. Typical materials are sometimes idealized to have a Poisson ratio of 0.33, but to have the most accurate ratio will give more accurate heat capacities near the low temperature limit. Poisson ratios can be taken from experimental references, from the Materials Project and are often comparable for chemically similar structures (alternatively, they be first calculated via the elastic tensor workflow).

based on the Gruneisen parameter,

Create and add the workflow to LaunchPad

The following command will submit a single job to the batch queue configured in my_qadapter.yaml. Assuming the same configuration as in the installation tutorial, the job will launch Fireworks from your LaunchPad until all of them have completed or you run out of walltime. This workflow should only take few minutes.

You can go to the output files from the batch job (*.out and *.error) at the launch directories to make sure everything went well or check the LaunchPad (lpad get_wflows).

Analyzing an Equation of State Workflow¶

Finally, we’ll analyze the results of our Gibbs free energy calculation. Here we’ll compare the heat capacity from our DFT calculation with experimental values. Simply add the following Python script (gibbs-analysis.py) to your folder and run it

If you open the saved figure, Si-heat-capacity.png, it should match the one below! 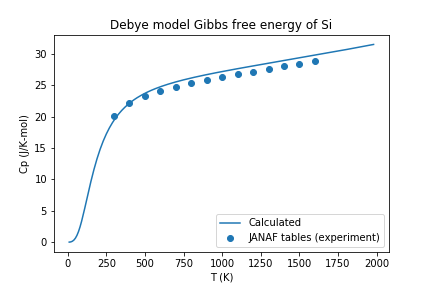 Heat capacity for Si calculated with atomate and compared with experimental values.¶

In this tutorial we have further demonstrated the use of atomate preset workflows to easily calculate and analyze interesting materials properties.

To see what other preset workflows can be run, see the documentation that includes them at atomate.vasp.workflows.presets. They can be set up and run in exactly the same way as this tutorial, by passing in a structure and an optional configuration dictionary.